A last minute check of leaflets and posters is done – the eternal question of ‘are we really ready for this?’ echoing round our minds. Then, emerging from the church gardens is… a zebra. A closer look reveals that this is, in fact, Graham Hunter, the esteemed vicar, dressed in a zebra onesie on what is possibly the hottest morning of the summer so far. We’re ready.

Believe it or not, a month’s worth of hard work and listening has led to this moment. At the end of June, Molly and I arrived at St John’s, ready to get stuck in as interns from CTC (the Centre for Theology and Community) and to find out what people felt about living in Hoxton – their loves and their concerns – with a particular focus towards just finance and road safety. Our first Sunday at St John’s coincided with the shared lunch, and this seemed like the perfect opportunity to start our listening campaign. We had printed out a map of Hoxton and asked people to mark with stickers the place where they would most like to see a zebra crossing. This revealed that people were concerned about the area immediately surrounding the church – an area that the Crondall Street/Pitfield Street crossing falls into.

We met up with various people over the next few weeks, listening to what they had to say. We learnt that people were concerned about the zebra crossing that has not been replaced following the redevelopment of Pitfield Street, and the number of cyclists coming down Pitfield Street who don’t stop at the zebra crossing that is just outside the St John the Baptist School. We then held a coffee morning at the school in order to find out a bit more from parents there what they would like to see. This discussion confirmed our action: the cyclists were the biggest problem. So we began to hunt down the much-needed zebra onesie, as well as making leaflets explaining why we are there and the concerns that had been raised, and a poster saying “respect the zebra” to be held from the side of the road. We also arranged a meeting with those at the council responsible for road safety in order to pass on our concerns – this was very successful, and communication is still ongoing.

Despite the early start that was involved, we deliberately chose a time that coincided with the school run, in order to be the most effective response to the issues that were raised. Lots of cyclists stopped – possibly encouraged by the cries of “respect the zebra” coming from the pavement – and they are quickly given a leaflet. Some road users do not stop – they are booed – and, on one memorable incident, one person stopped, and the cyclist directly behind him did not, leading to an early morning pile-up (that said, they both immediately cycled off again, appearing no worse for wear). Lots of people – pedestrians and cyclists alike – stop for a quick selfie with the zebra-vicar, and almost everyone who passes on foot tells us how necessary such an action is, and what a problem the cyclists are. The workmen on the building site near-by are keen to get involved; cue pictures of their lorry at the zebra crossing, being ‘stopped’ by the zebra-vicar.

We're really thrilled to be welcoming Josh Richard back to St John's to join our team for the coming year. Josh spent a month with us back in 2014 as a Jellicoe Intern, and having graduated this summer from Oxford University, felt called back to London to be involved in work with church and politics.

The Buxton Leadership programme is run by our good friends, the Centre for Theology & Community, and gives participants an opportunity to work part-time with a local church enabling church-based community organising, and part-time in the Houses of Parliament, usually working for an MP.

Josh will be working part-time from November with Rt Revd Paul Butler, the Bishop of Durham, in the House of Lords, and the rest of his time will be based at St John's helping us to use the tools of community organising to help develop leaders within our congregation as well as working with Caitlin Burbridge to develop local community organising: 'Hoxton Citizens'.

Josh will be getting in touch with may members of our congregation to get to know us, so please be friendly when he emails or phones! If you want to get in touch with him directly, you can email him here. 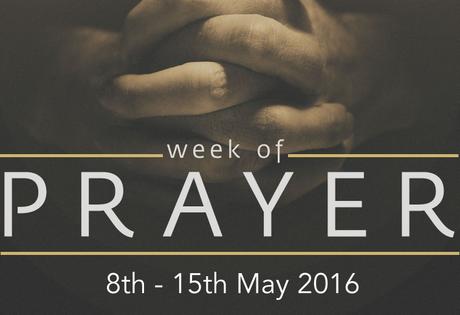 In January 2016, at a PCC meeting, we did an exercise to consider how we would prioritise 9 of our core activities in the church. In pairs, we organised 9 statements into priority order - and it was heartening, and unsurprising, to find that every pair put ‘Develop the Prayer and Worship life of our church’ as the top priority.

On the back of this, we began to dream about an audacious scheme to organise a week of prayer and worship running up to Pentecost on 15th May. We dreamed about how amazing it would be to mobilise our congregation to spend 168 hours in unbroken prayer and worship! Then, in the middle of March, I received a letter with the crests of the Archbishops of York and Canterbury on the envelope. When I opened the letter, I discovered an invitation to all the churches across the country to join together in a week of prayer running up to Pentecost - I took it as confirmation that our audacious plan was something we should go for.

Initially, I was planning something with considerable resources required - leading a prayer course; doing some training and teaching on different spiritual exercises and the like… But as time progressed we realised that all we really could manage was to open the chapel, put out a sign up sheet, leave some guides to prayer, a flip chart and a blank chalkboard wall with chalks and hope for the best…

We created a simple excel sheet detailing every hour from midday on Sunday 8th May to midday Sunday 15th May. We put in the regular worship services and prayer meetings, and then left lots of blank spots for people to sign up for. We also made an online sign-up sheet with 24-7 Prayer - which had the benefit of emailing reminders to those who had signed up…

We gave lots of freedom for people to interpret the space and time as they found most helpful. Some sat in contemplative prayer; some wrote up Scripture verses and prayer requests on the chalkboard or flipchart; we held ‘noisy worship’ at midnight one night - where we pumped up the volume on the AV system and put on worship music videos; we held ‘fire pit worship and prayer’ sessions in the church gardens.

One person reported the hour of ‘noisy worship’ as being the most profound experience of the presence of God they had ever had! I think we’ll be repeating this again!

One member of our church, Bosede Owa, spoke about our experience on this video produced by Lambeth Palace about the national prayer initiative 'Thy Kingdom Come':

Thy Kingdom Come 2017 Invite from Frogspawn Creative Limited on Vimeo. 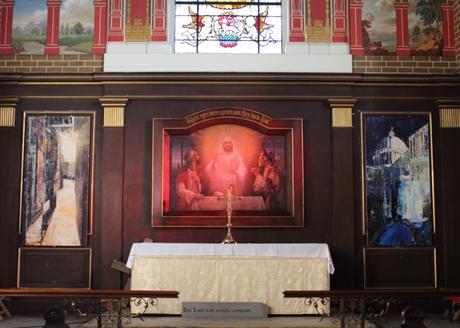 Thank you so much to local artist and congregation member Caroline Akhtar, who has kindly loaned us two of her paintings to be installed on the east wall of the church. The two contemporary paintings engage with urban life and Christian spirituality. ‘Liminality’ (on the left) evokes a light drawing us through the darkness of an urban landscape - making us think perhaps of the kingdom of God, and in this Advent season especially, the dawning brightness of Christ dispelling all darkness. The painting on the right, ‘Occupy’, depicts St Paul’s Cathedral, but you can also make out the murky dome tents of the Occupy protest of 2011 - reminding us of the poor, the marginalised, and that Christ also ‘became flesh and pitched his tent among us’. 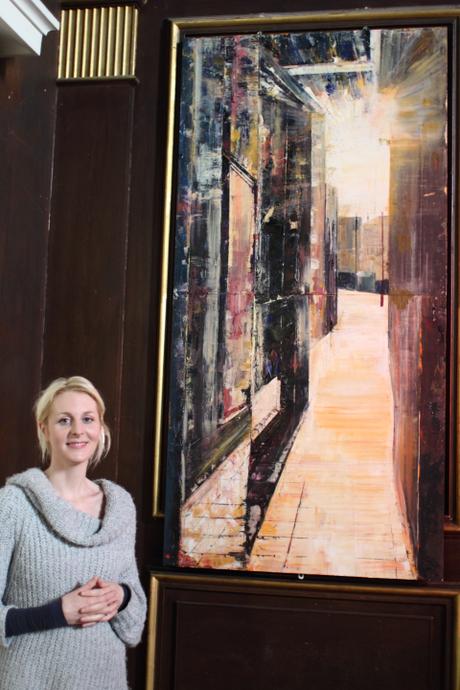